JavaScript is one of the most popular languages among developers nowadays. There are lot of freshers and experienced developers love to build application or project using JavaScript. 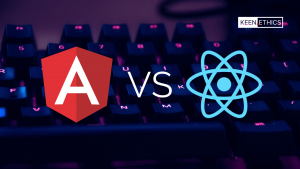 There is confusion when one has to pick up the right framework or library for the project. Angular and ReactJs are the topmost priority but still, most of them are unable to decide which one would be good for one’s project.

Let’s have a quick introduction of Angular and ReactJs:

What is React Js?

React is a JavaScript library developed by Facebook which allows one to build UI components. It facilitates the creation of interactive user interfaces. It also makes the code easier to understand and launch. React JavaScript framework uses server-side rendering to provide a flexible, performance-oriented solution.

Here, are the pros/benefits of using React:

Both React and Angular Js are great options with respect to single-page applications. However, both of them are also entirely different instruments. There might be statements like React is better than Angular or also vice versa.

Whatever may be one’s perception of the discussion about React vs. AngularJs, one needs to make choices based on the requirement of functionality and usability.

JavaScript and versions of JavaScript

What is Front End Development?

JavaScript and versions of JavaScript

JavaScript is a scripting language that was introduced to make web pages alive and be interactive with the user. The interaction is possible due to the programs or scripts written along with HTML. It is most widely used nowadays and …