HTML is perhaps the most hyped technology since people starting putting rounded corners on everything and using unnecessary gradients. In fact, a lot of what people call HTML 5 is actually just old-fashioned DHTML or AJAX. Mixed in what all the information is a lot of misinformation.

HTML 5 is simply a new set of standards, semantics and rules for coding website markup that can take advantage of several new “native” browser features such as offline storage, multimedia playbacks and a small level of interaction. Much of what one sees on HTML 5 website that is really cool or innovative isn’t the actual markup, but a combination of CSS 3 and j Query, both themselves new and exiting standards evolving right alongside    HTML 5.

For now, let’s dispel some myths about HTML 5 to pique one’s interests.

Apple seems to get blamed for everything, but while HTML 5 has some amazing solutions for mobile, it was not created to meet the demands of the iPhone. Their goals were simple – propose these principles to W3C as a road map for a sleeker, faster, better HTML standard. The principles covered aspects such as backward compatibility, error handling, practicality, open development and avoiding device specific profiling.

One doesn’t know surely that how this myth began circulating, but the working draft was closed – meaning nothing more can be added or significantly changed. Because it has been driven by Opera and Mozilla from the start, it may even reach W3C’s Candidate Recognition. Even still, one can use HTML 5 right now and rest assured it will degrade gracefully and work in older browsers with the inclusion of some lightweight JavaScript.

It makes the most sense to use semantic class names and CSS 3 declarations when building something with HTML 5, but it isn’t a requirement.   HTML 5 is just markup, so it gets along just fine with CSS 2 styling, but what it does require is complete styling for all presentation elements of one’s design.

On the contrary, HTML 5 is built around accessibility. While drafting the spec, utmost care was taken to ensure each element works with WIA ARIA landmark roles. These roles are specialized attributes added to the tags that allow accessibility devices such as screen readers to better interpret the site’s flow and content better.

The fact is that Flash is still used by several million websites and developers world-wide. The misconception was born, once again, from the high-profile fallout between Adobe and Apple and the rapid adoption of HTML 5 audio and video for application and mobile development as a result.

A group of developers at Opera and Mozilla disagreed with this approach and presented a paper to the W3C. The paper suggested seven design principles: 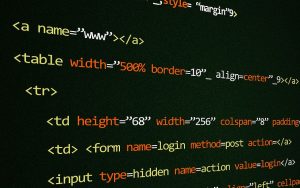 Hypertext Markup Language is the standard markup language for documents designed to be displayed in a web browser. Thus, HTML is the most sounding language in the coming era.

Key Features of HTML 5 over HTML 4